CD: AND THE BAND PLAYED ON 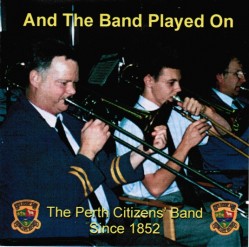 This recording covers a selection of tunes played over the years by the Perth Citizens? Band and was recorded in 2000. There are 20 Songs on the CD, including: And The Band Played On/Hot Time in the Old Town, Bring Him Home, British Ayres Selection, Dixieland Spectacular, First Suite in E? for Military Band, Golden Age of Rock and Roll, Hootenanny, Hymn of Freedom, Invercargill March, Joy to the World, Just A Closer Walk With Thee, L’Etoile March, Maple Leaf Forever, Moonlight on the Rideau, A Perfect Day, Punjaub March, Shake Rattle and Roll, Stephen Foster Fantasy, Stormy Weather, Teddy Bears’ Picnic

Sound sample from our CD: Moonlight on the Rideau 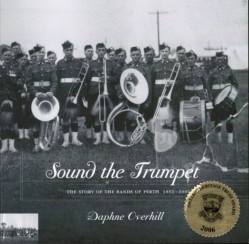 “A way of life as much as a way of music, the marching bands of Perth, Ontario have reflected the times of their town from the days before Confederation, making them one of the longest continuous musical presences in the country. In Sound the Trumpet, historian Daphne Overhill brings to life a rich pageant of band and local history. From the days of temperance through the real story of the original Music Man up to the new millennium, the Perth bands have interwoven their history with their community and maintained a musical tradition as important to the 21st century as to the 19th.”

Winner of the Ontario Heritage Trust Award in 2006.

The book is softcover format, 182 pages including photographs and is indexed.

SHEET MUSIC: MOONLIGHT ON THE RIDEAU 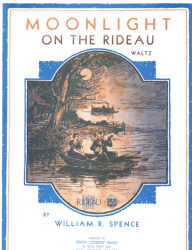 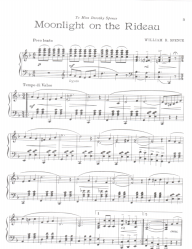 The song Moonlight on the Rideau was composed for the Perth Citizens? Band by W. R. Spence in 1936.

Published by the band in 1982 to mark the 150th Anniversary of the Rideau Canal, the sheet music to this Viennese-style waltz is five pages in length. Printed on heavy paper it includes lyrics and a brief history.