The Perth Citizens’ Band will be resuming its Annual Christmas Concert on Sunday December 19th, 2012 starting at 2:00PM at the Crystal Palace beside the Tay Basin in Perth. Note: Proof of Double Vaccine and ID are required to sit inside the building.
The long standing tradition of the Christmas Concert at the church was revived in 1993 by conductor Brian Tackaberry.
From the 1920s to 1940s the band had previously played concerts during the Christmas season. 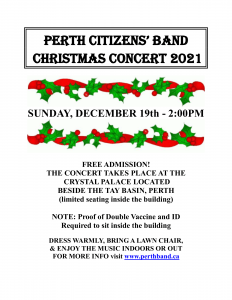